India happily celebrates the nation's Republic Day, which is a gazetted holiday on January 26 each year. It is a day to remember when India's constitution came into force on January 26, 1950, completing the country's transition toward becoming an independent republic. 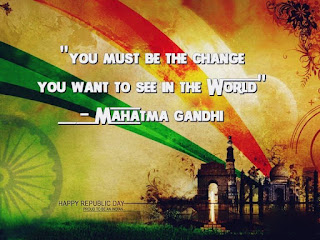 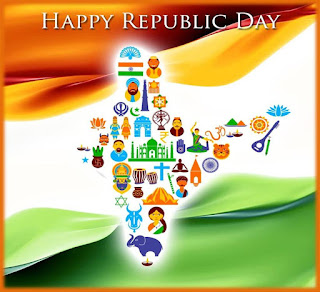 What Do People Do?

Lots of effort is put towards organizing events and celebrations that occur on Republic Day in India. Military parades are held in New Delhi and Representatives of the Indian Army, Navy and Air Force and traditional dance troupes take part in the parades.
A grand parade is held in New Delhi and the event starts with India's prime minister laying a wreath at the Amar Jawan Jyoti at India Gate, to remember soldiers who sacrificed their lives for their country. India's president takes the military salute during the parade in New Delhi while state governors take the military salutes in state capitals. A foreign head of state is the president's chief guest on Republic Day.
Awards and medals of bravery are given to the people from the armed forces and also to civilians. Helicopters from the armed forces then fly past the parade area showering rose petals on the audience. Many school children participate in the parade by dancing and singing patriotic songs. The parade concludes with a "fly past" by the Indian Air Force, which involves fighter planes saluting the president. These leave trails of smoke in the colors of the Indian flag and is a very beautiful sight. 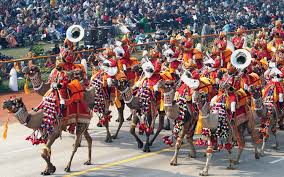 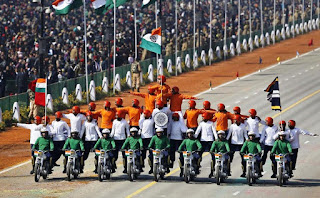 Republic Day represents the true spirit of Independent India. Military parades, displays of military equipment and the national flag are important symbols on this date. India's national flag is a horizontal tricolor of deep saffron at the top, white in the middle and dark green at the bottom in equal proportion. A navy-blue wheel in the center of the white band represents the chakra. Its design is that of the wheel which appears on the abacus of the Sarnath Lion Capital of Ashoka. 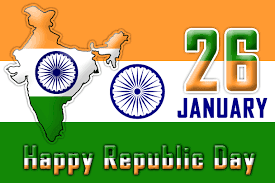 Schools and colleges celebrate Republic Day in advance. Here are some things they inculcate
Knowing different sections, history, geography, current politics etc.
The show can be on various things such as local art styles, crafts, music and dance. 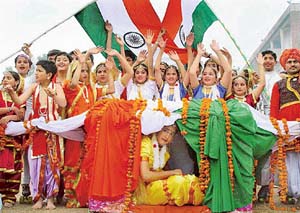 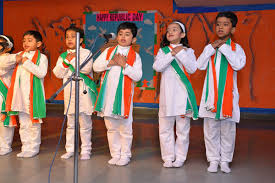